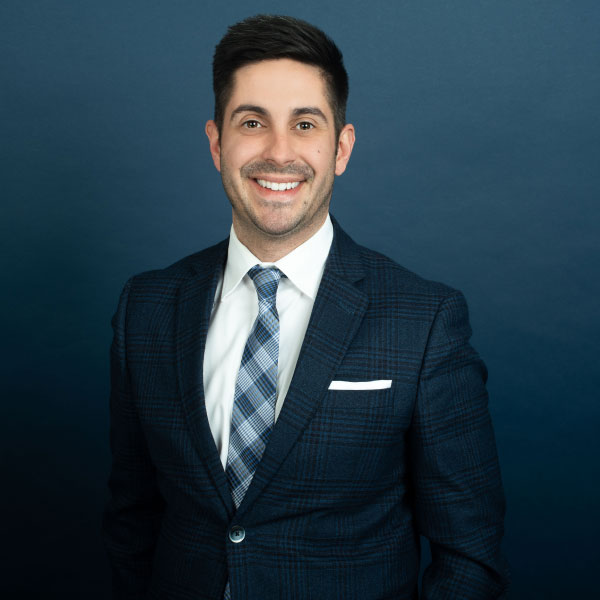 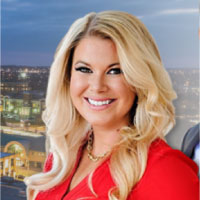 How a family of Kitchener-Waterloo REALTORS® is raising $50,000,000 to build a world class childcare cancer and treatment centre in the Waterloo region.

In 2019, REALTORS® Brian Santos and Joy Stewart found out their daughter, Scotland, was diagnosed with a rare form of blood cancer. At just three months old, Scotland began a rigorous treatment of chemotherapy, but the journey to get there only added obstacles for the family. The closest hospital that could save Scotland’s life was more than an hour away from their hometown of Kitchener-Waterloo – with limited children’s cancer care nearby. Scottie will be three years old in October and for most of her life, she has bravely fought cancer. At the end of 2021, she was declared-cancer-free.

After dealing with the hardships of their journey, Brian and Joy devoted themselves to helping build a local childcare cancer treatment centre in the Kitchener-Waterloo region – one where families didn’t have to travel hours in traffic or a snowstorm to receive the care they needed or risk their child getting sick in the car from the arduous trip after treatment.

Since December 2021, they’ve raised over $437,000 with no plans to stop and an unparalleled amount of support from their local community and abroad.

This is Brian and Joy’s Real Heart story. 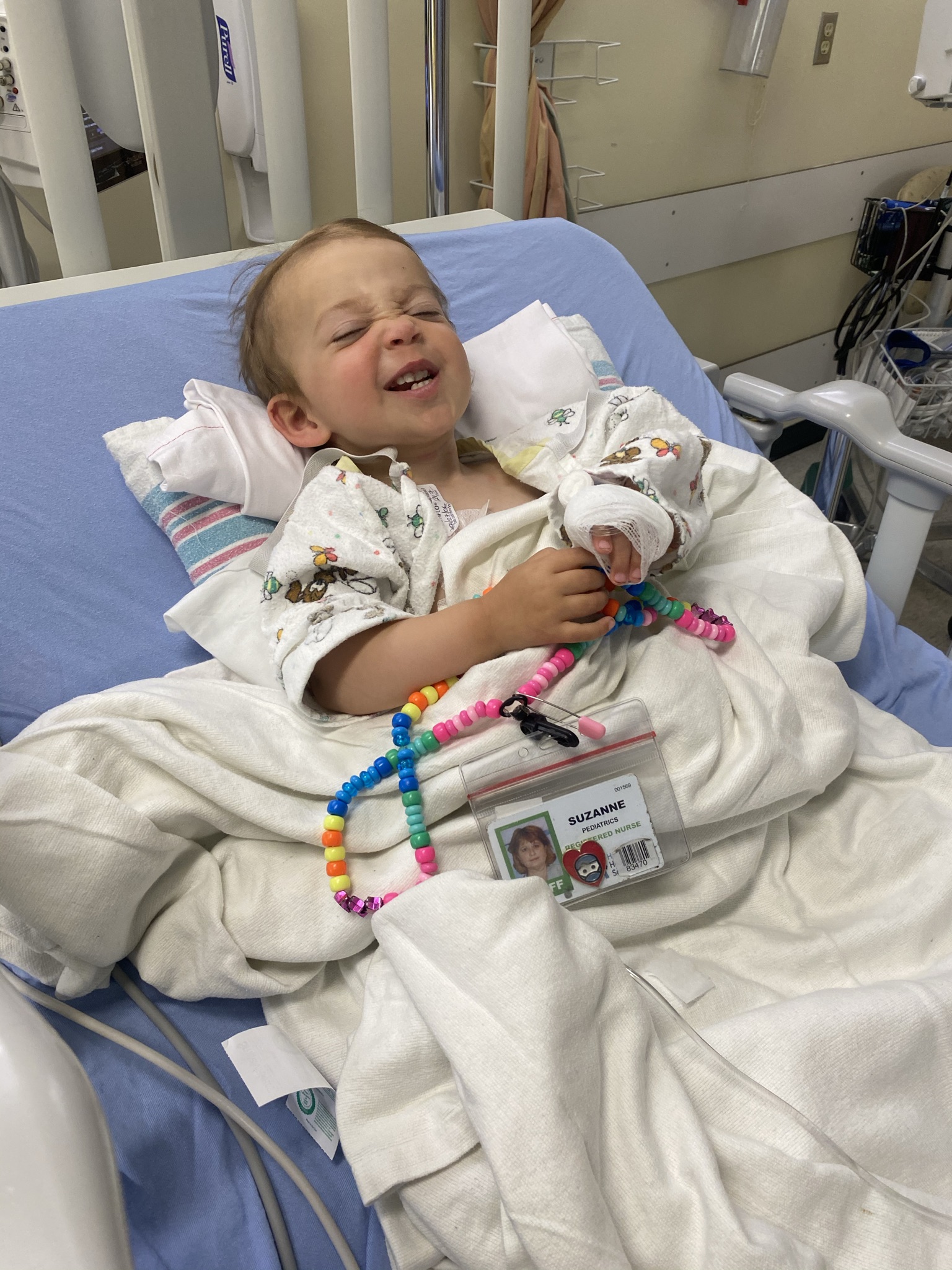 Q. What was the inspiration for Scotland’s Yard?

A: Scotland’s Yard is inspired by our daughter Scotland who, at three months old, was diagnosed with a rare form of blood cancer. For the last two years, through chemotherapy and numerous hospital visits, she bravely fought through her cancer. Last Christmas, we received the wonderful news that she was finally cancer-free.

Having a child with cancer is immeasurably difficult.

One of the toughest challenges is travelling to the hospital. We live in Kitchener-Waterloo and the closest children’s hospital to us is in Hamilton – about an hour away. Thankfully our backgrounds as REALTORS® allowed for flexibility in our work schedule, but it was so hard on Scottie. Throughout her chemotherapy, there were countless times we had to stop on Highway 401 or Highway 6 due to Scottie’s severe and debilitating nausea. Weather and traffic are also major issues. In March, we almost missed an MRI appointment because there was a snowstorm, and we had no idea if we were going to make it. The travel became increasingly stressful and put a huge burden on us, and more importantly, on Scottie.

We aren’t the only family in the Kitchener-Waterloo area going through this experience. There are roughly 200 families like us travelling to Hamilton, London, or Toronto for treatment. It’s too far and unfair to these families. 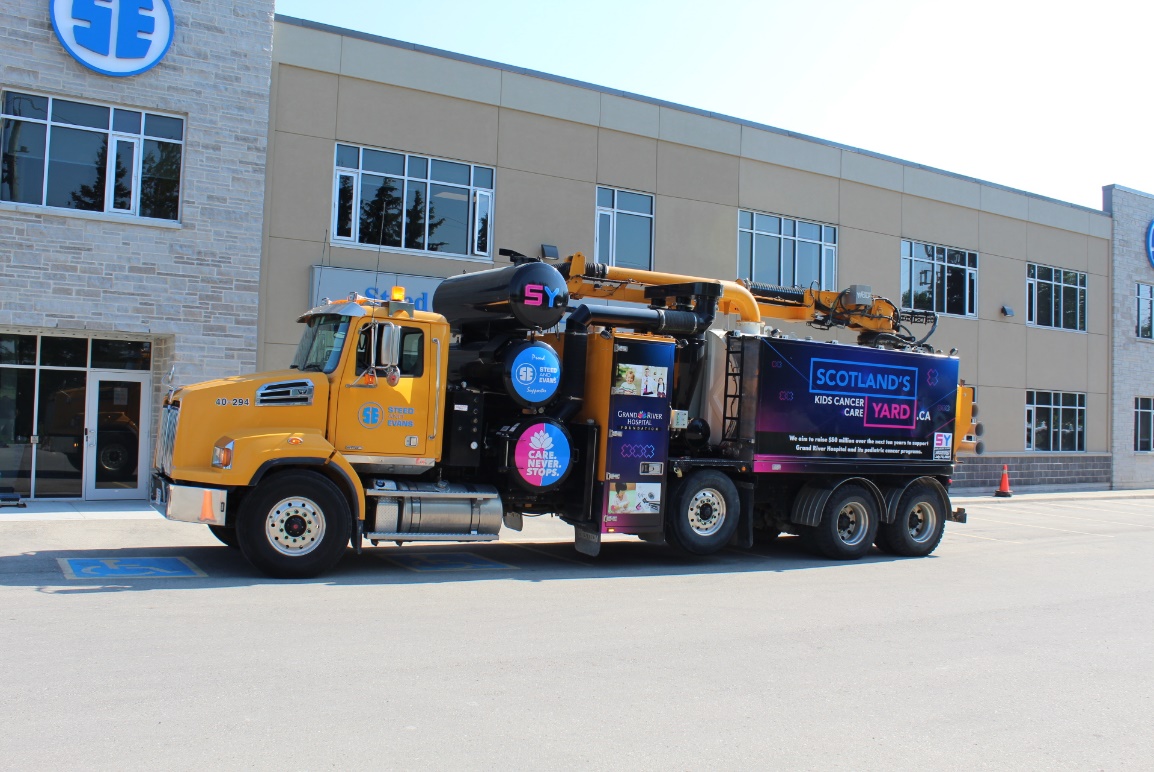 Q. You touched on community support for Scotland’s Yard. What has this looked like?

A: In partnership with the Grand River Hospital Foundation, our goal is to raise $50,000,000 to build an entire cancer and treatment centre. It’s an exceptional number, but as we hit smaller milestones, there are improvements that can be made. For example, if we raise $3,000,000, our hospitals are targeting to have a PET CT, Linear Accelerator and Nuclear Medicine Spectrometer. Since December, thanks to our community, we’ve raised over $437,000 and are on track to surpass $500,000 by the end of summer.

There’s been dozens of local businesses, community leaders, neighbours, family, friends and complete strangers who’ve done a fundraiser or contributed a portion of their sales towards Scotland’s Yard.

For me, one of the most impactful stories was a youth hockey coach who committed to shaving his head after his team raised more than $20,000. His wife is also fighting her own battle with cancer, and it touched our hearts when they chose Scotland’s Yard as the charity to receive the funds. I remember being very emotional because it’s amazing what people can do; how selfless they can be and how committed they are.

Word of Scotland’s Yard spread like wildfire. Soon, we had people across the province donating to our cause and holding their own local events to raise money. We’ve been overwhelmed by the support from everyone who’s donated their time and money to our cause.

Our largest fundraiser is on July 8, 2022. Working with HockeyFest, which has been putting on these events since 2018, we are hosting a ball hockey tournament where teams of amateurs, former, and current NHL players can compete to win, but most of all, to have fun. This will be a full-scale event with sponsors, food and drink stands, and the opportunity for anyone to join in on the fun and support Scotland’s Yard. We’re thrilled to say we’ve completely sold out, with over 50 teams competing. 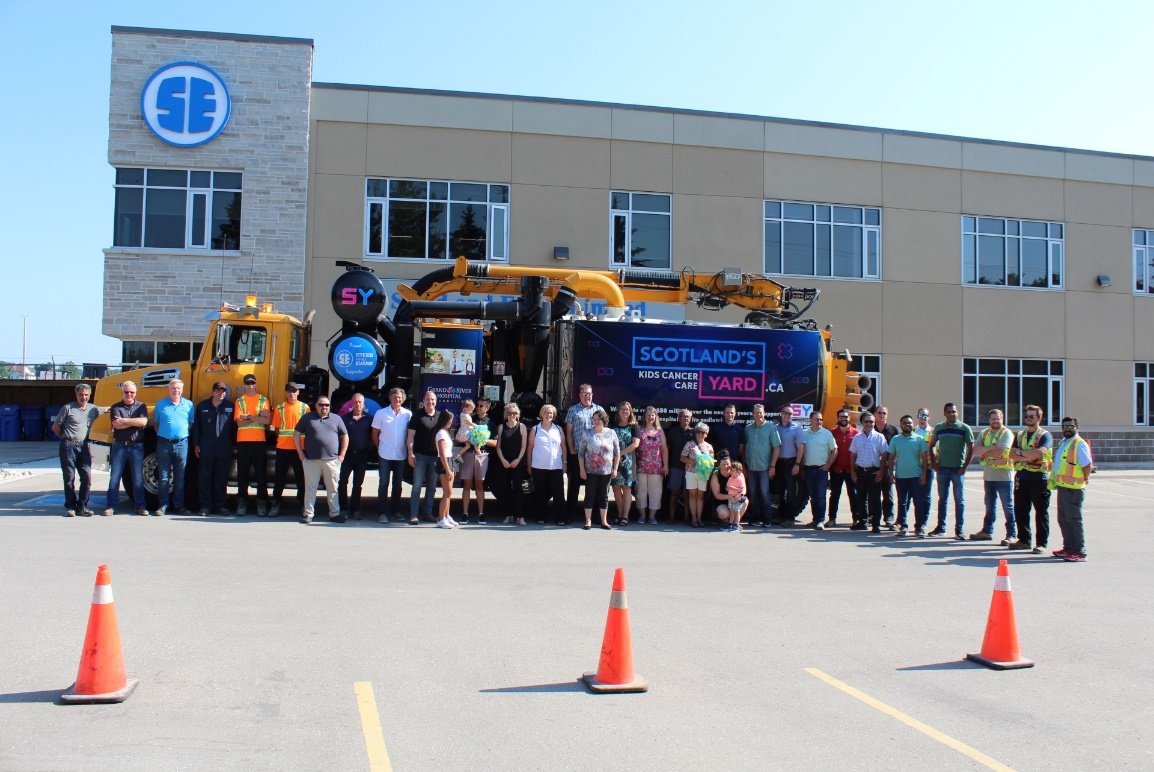 Q. Tell us more about the ball hockey tournament. How did it come to life and what caused it to grow so quickly?

It started off quite small. At first, it was a local tournament of recreation and youth league teams. It was set up to be competitive, fun, and anybody could join. I think that’s why it grew so fast. It was an inclusive event for a shared cause in our community. The event grew even larger when local NHL star, Ben Chiarot, became involved and helped promote it to the broader community. Soon, we had to hire HockeyFest to help with setting up the hockey rink, finding referees, and other logistics to help make the event run smoothly.

I’m going to be honest with you, it’s been overwhelming. But working directly with the Grand River Hospital Foundation makes our lives easier. Their board and staff have been a crucial and wonderful support system in helping us prep for the event for this July. 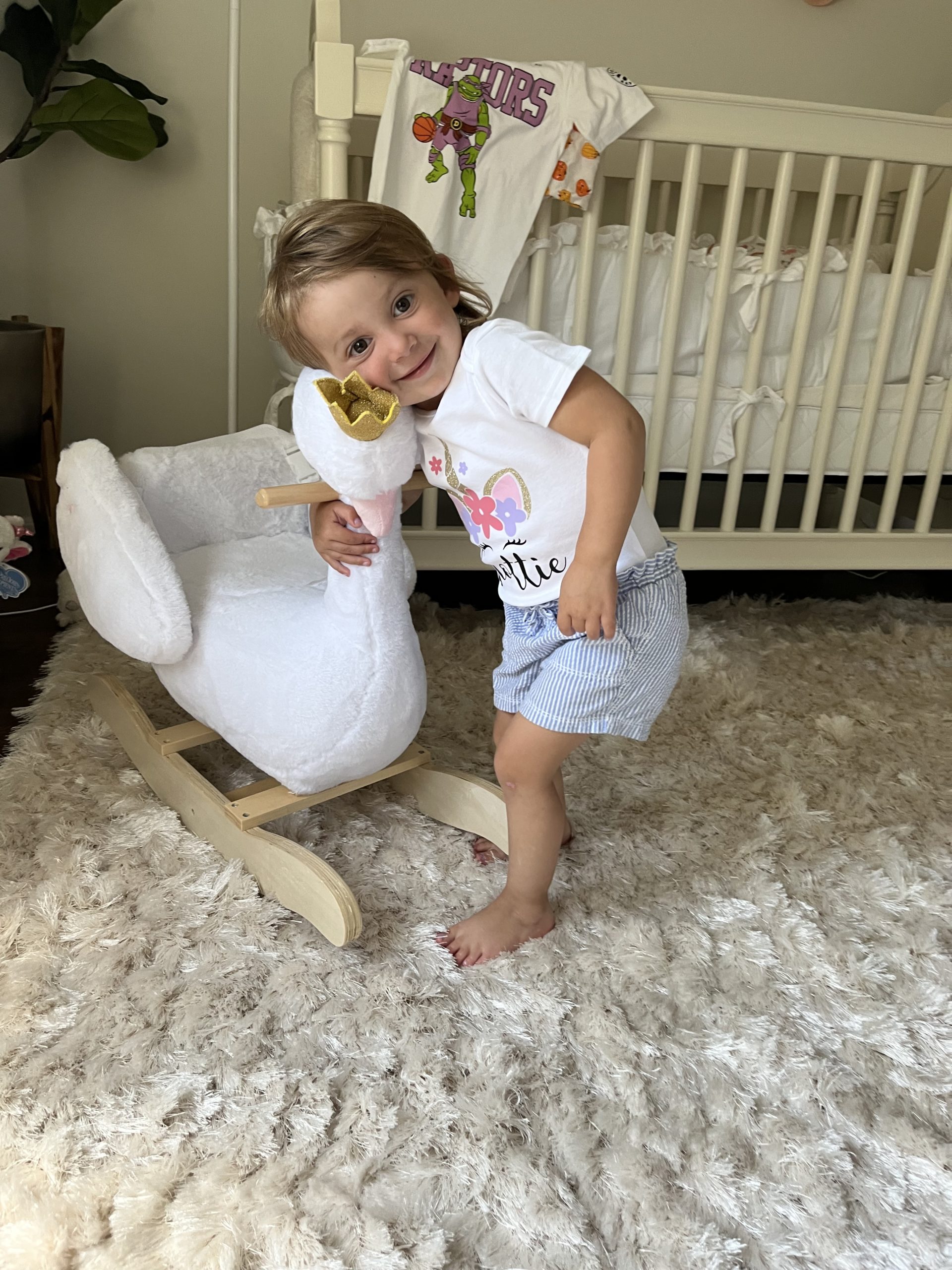 This may be cliché, but we’re still learning as we go along. Ultimately, I believe if you can dream it, you can do it. When we launched our initiative, it was with a single social media post. Then it just grew as our community became more involved to learn about Scottie and our story. I’m still blown away over how amazing this world and community is.

My advice to that person looking for inspiration is to just do it. Sometimes we put too many barriers up and second guess ourselves along the way. For me, it was hearing stories from the OREA community ambassadors – Bruce and Vince – who inspired me to not overthink this. Never be afraid or be too shy to share your story, no matter how tough or uncomfortable it may be.

Imagine the impact you can have by sharing your story, or the story of someone you know.

We want to hear from you.

The trademarks REALTOR®, REALTORS®, and the REALTOR® logo are controlled by The Canadian Real Estate Association (CREA) and identify real estate professionals who are members of CREA.

The trademarks MLS®, Multiple Listing Service® and the associated logos are owned by The Canadian Real Estate Association (CREA) and identify the quality of services provided by real estate professionals who are members of CREA. Used under license.