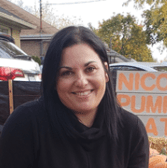 How an Ontario REALTOR® took her passion for the fall and turned it into a charity fundraiser for her community.

Nicole Beinert, a REALTOR® with Royal LePage Signature Realty in Toronto, is no stranger to community involvement. For the past decade, she has been throwing an annual pumpkin patch fundraiser, Nicole’s Pumpkin Patch, to raise money for the Royal LePage Shelter Foundation.

This is Nicole’s Real Heart story.

Q: Tell us about your Pumpkin Patch fundraisers.

A: I’ve been involved with volunteer work ever since I was in my early teens. I believe that we are here in this world to do good for others and anything you do should resonate with something that you love and care about. This is the mentality I have towards fundraising and giving back to my community.

I held my first pumpkin patch fundraiser 9 years ago. I wanted to find a way to bring my community together in a fun and engaging way while fundraising money for a worthy cause.

Fall is one of my favourite seasons. I love the colours. I love pumpkins and I love pumpkin patches. There’s something about fall that is so beautiful to me and I thought this was something that I could easily connect with my passion for giving back.

I had this idea to hold a fall-themed fundraiser where I bought pumpkins from a local farm and placed them on my lawn. Initially, that was it. I invited people over to pick up a pumpkin and instead of buying the pumpkin, they could donate to the Royal LePage Shelter Foundation.

To think back to 9 years ago and how small the fundraiser was is always shocking to me. Over the years, it began to evolve. Soon there was food and drinks, music, and other attractions, like balloon twisting. It really became a community event that people looked forward to every year – and it was all benefiting charity. I’ve received such positive reactions. The more it grew, the more money we raised and the more motivated I became to make it bigger the next year.

Q: Can you tell us more about the Royal LePage Shelter Foundation that you’ve been working with?

A: It’s an incredible foundation. It’s one of Canada’s largest public foundations and they raise money for women’s shelters and violence prevention programs across the country. These shelters ensure women and children have a safe place to go to escape domestic violence.

I work with this foundation because I know every single dollar raised goes directly to both their national and local programs.

My donations go through them, and they ask me to pick a shelter. I usually donate to my local women’s shelter, North York Women’s Shelter (NYWS). NYWS provides safety to those in need in my community and that’s ultimately what motivates the pumpkin patch event year after year.

I’m grateful that I’ve never been in a situation to need a shelter. But at the same time, I know how many people rely on the safety and comfort they provide, so I’m grateful to be able to part of an organization that supports this.

I always know, no matter where the money goes, whoever needs it will always receive every penny we raise.

Q: How has COVID-19 impacted your fundraising events?

A: This past year, I thought long and hard about whether or not I should host the pumpkin patch. But when I asked my neighbours and friends what they thought, they told me that people really need something like this – that the kids, in particular, need some sense of normalcy during these difficult times.

I couldn’t say no to that! So, I got to planning and thinking about how to do it safely. I think there were only 20 or 25 people allowed on the property at any given time. Everybody wore masks and we had a clearly marked entrance and exit. My husband’s band actually played for the first time this year, which was a really fun addition.

The end result was incredible. I picked up 130 pumpkins for the fundraiser, and by the end of the day, they were gone. In previous years, I would usually have a few left over, but not this time. To see this the pumpkin patch be such a success during COVID-19 and to see a community rally around a cause like this blew me away. We raised $1,500 this year, all of which went to the Royal LePage Shelter Foundation, of course.

And at the end of the event, despite my initial hesitation, it was all so worthwhile. It’s these kinds of things that bring our communities together. Part of last year’s success was the shining light it offered for such a dark time. The fundraiser was an opportunity for people to safely meet outside and see each other after such a long time – it brought some normalcy to the community.

It felt like a win-win for me, which made it all the more enjoyable.

Q: What’s your favourite part of the pumpkin patch fundraiser?

A: Just seeing everybody enjoying it so much. It’s become somewhat of a staple in our community, and everyone is so appreciative of it – it’s really rewarding.

You see the community coming together, walking down the street with their wagons, and the kids with their pumpkin-filled wagons.

It’s beautiful. I never expected it to be this big.

Q: What do you think has been your biggest lesson learned along the way? What would you want to share with other people looking to do something like this?

A: Don’t be afraid to fail. The first year I did it, I was like, okay, well, what’s the worst that could happen? I’ll have 60 leftover pumpkins?

So, just go for it. Give it a shot. You’ll learn something from everything you do.

Imagine the impact you can have by sharing your story, or the story of someone you know.

We want to hear from you.

The trademarks REALTOR®, REALTORS®, and the REALTOR® logo are controlled by The Canadian Real Estate Association (CREA) and identify real estate professionals who are members of CREA.

The trademarks MLS®, Multiple Listing Service® and the associated logos are owned by The Canadian Real Estate Association (CREA) and identify the quality of services provided by real estate professionals who are members of CREA. Used under license.